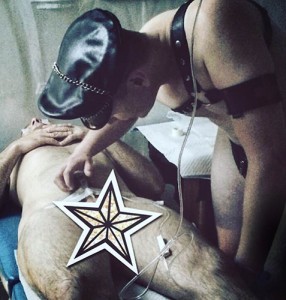 Saline injection has been something on my radar for a while now. It’s one of those unusual practices in the kink world that isn’t common and while it wasn’t a ‘must do’ kink for me it’s certainly something that planted a seed in my mind.

So when 13’s birthday came up I planned a saline injection session just for him. Under the watchful eyes of an experience saline practitioner (among other things) we took his balls for a spin. However firstly we made time to spread him eagle between my dungeon posts, give him some birthday gut punching and nipple torture.

The saline was an interesting experience and I’m almost keen to try it on myself. The saline stays in your system, fairly localized, for over 24hrs. 13 had an important appointment on the Monday so was a little worried about being stuck with elephant balls – so we put half a bag in at 500ml. Not too long after starting and with little effort his balls were an impressive size and after removing the needles and tape he enjoyed wobbling them around.

He told me later that day that he had an amazing wank.